I had a lot of touristy things planned for the day. The first was going to be a walking tour. One of the best advice I got from researching before traveling was figuring what tours to take. One recommendation was the SANDEMANs free walking tours. They have multiple tours across many countries. They work on the tipping model, you pay the guide what you think the tour was worth to you. Which, is an amazing idea, because so many times you get bored or think the tour wasn’t worth it, but usually it’s already paid for. So I started the day with a 3 hour walking tour of Edinburgh.

I thought it might be nice to write about some snippets from the tour and show you Edinburgh the way I saw it, through its interesting stories. One of the funniest things I heard and it became a constant thread throughout my travels in Ireland and Scotland was that the Scottish people are lazy in naming things, so they name things as they are. If there is a dock, it’s called Dock road, if there is a museum, it’s called a Museum road. I guess, you get the drift.

The meeting point was right in the middle of one of the venues for the Fringe Festival, known as the Royal Mile (*Fun Fact – The Royal Mile is actually more than a mile by 107 yards. It starts at the Castle entrance to the gates of Holyrood Palace.) Having reached on time, as usual, I got to experience a little acapella from some talented youngsters on the Royal Mile.

After we got our History On with an overview of Scottish history, we walked to St. Giles Cathedral. *Fun fact – St. Giles is called a Cathedral but it actually isn’t one as there is no Bishop. One of the unique things about the Cathedral though is besides it. This is where Protestant Reformer John Knox is buried. It’s on now seen as parking spot no 23. It was earlier a cemetery but now it’s part of the Scottish Parliament. 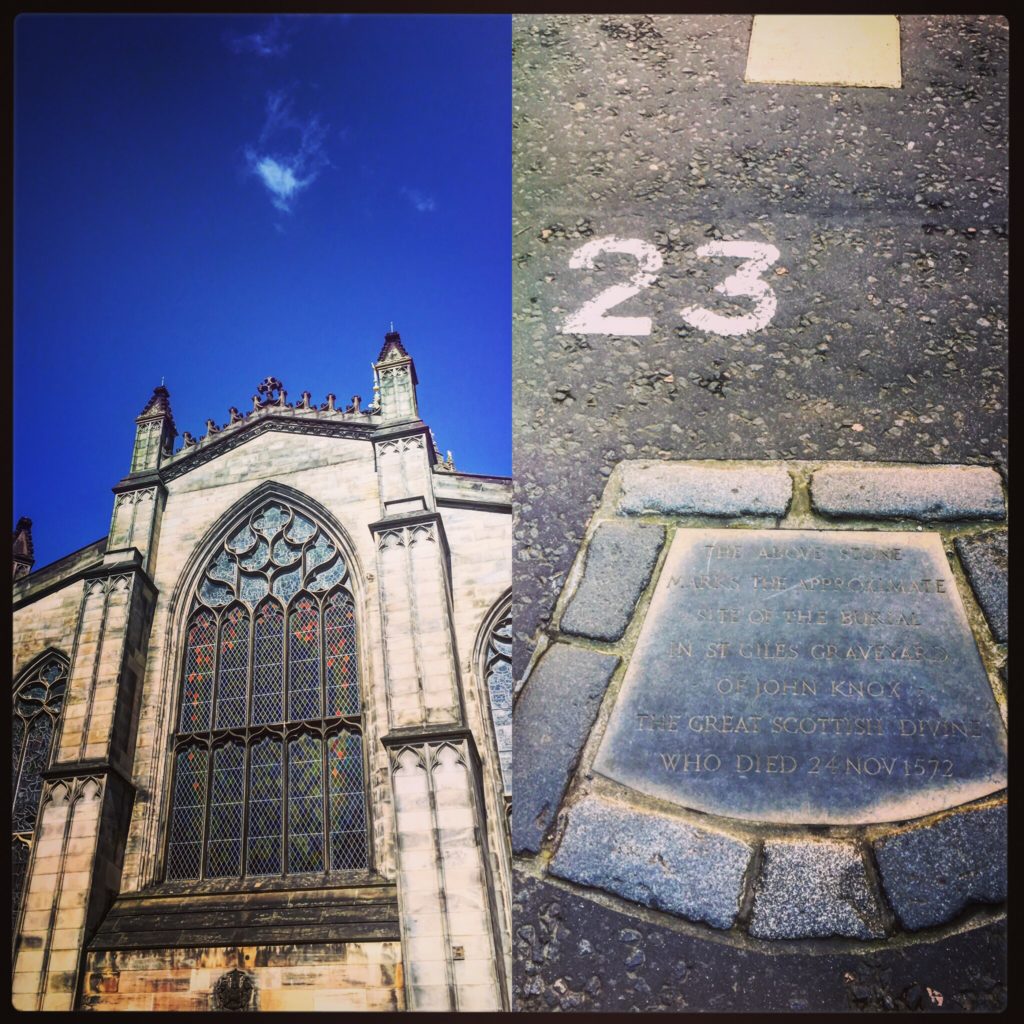 People touch the toe of the 9ft statue of the philosopher David Hume for good luck & knowledge. *Fun Fact – The irony is that he was a defender of rationality and didn’t believe in superstition and people now touch his toe for luck. You’ll also notice in the picture, the paint on his toe is worn out. 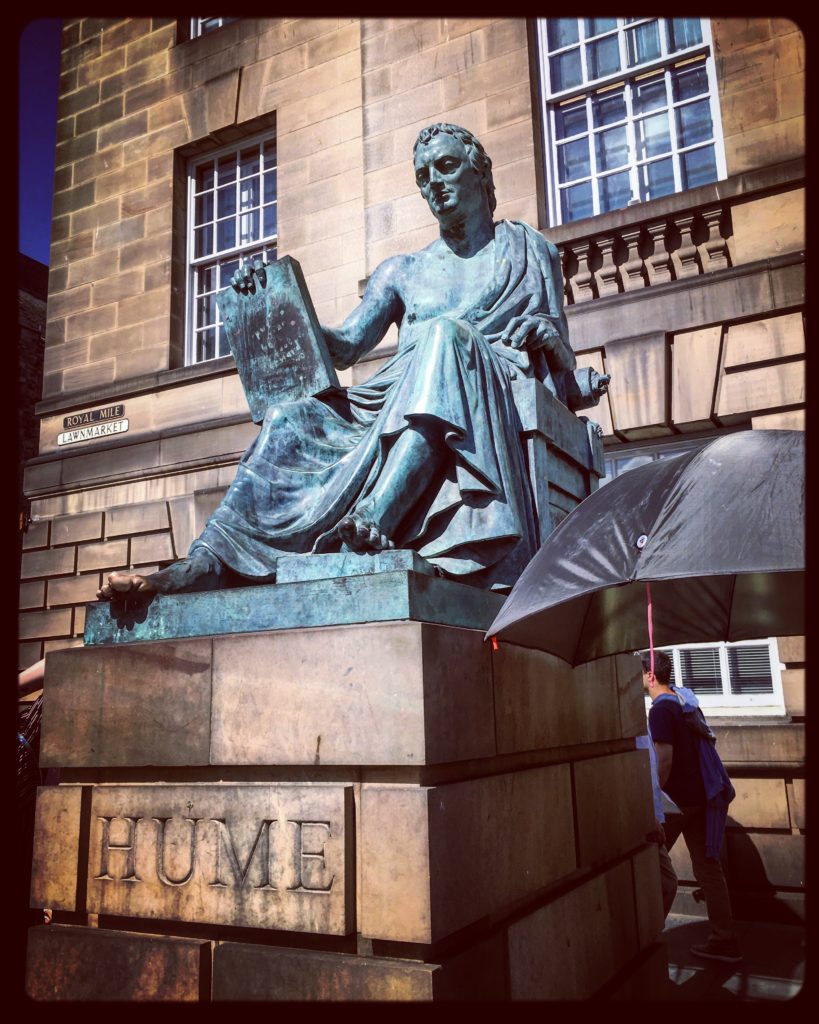 An interesting bit of information was that Edinburgh gave itself the title ‘Athens of the North’ because throughout the 1700s the architecture of ancient Rome had been the inspiration for designing buildings. On some buildings you will even see a Sphinx. One can see this type of architecture at Calton Hill, where there are columns.

Place 3: The Writers Museum
The next stop was tucked away in a quiet close off the Royal Mile also  Lady Stair’s House, the home of the Writers’ Museum. What I found interesting were the quotations of famous local writers in the courtyard. The museum features great Scottish writers – Robert Burns, Sir Arthur Conan Doyle, Sir Walter Scott and Robert Louis Stevenson. Stories about these authors is what intrigued me more about this place. 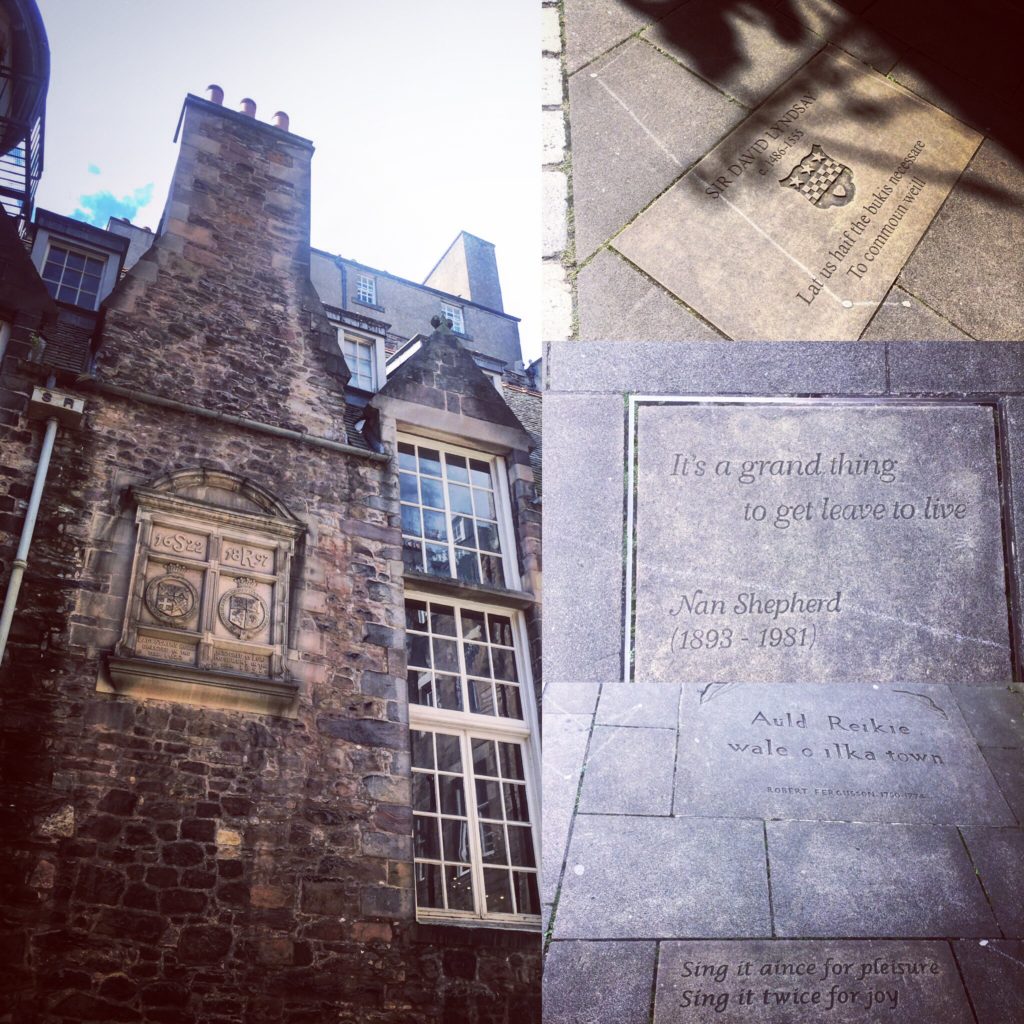 The other unique bit of trivia was about the tartan trend. Sir Walter Scott had invited the King of England for a visit to Edinburgh. In his novels, Scott wrote a lot about Highland culture. It is said, that the King expected to see people dressed in tartans when he visited, as that was what he had read. In real life, the locals never wore it. So apparently,  Scott had to work with a theatrical designer to re-create the tartan trend and have people wear it for the King’s visit. He is known to have single-handedly revived what is known as Scottish culture today, bringing back tartans and kilts.

Robert Louis Stevenson is credited for having written Jekyll and Hyde. It is said to have been inspired from a notorious locksmith by the name of Deacon Brodie who installed locks and then went and stole from those same places. He became so good at it, that he got a staff after a while. By day he used to meet & greet with high society and by night he used to gamble. His double life was the said to be the inspiration for the book. And like my guide said, you know you’re famous if you’ve got a pub named in your honor, so there stands a Deacon Brodie’s Tavern at Lawn Market where he was hung.

One thing I have to give to the Scottish is the kind of laws they came up with. One of which was called the Nastiness Act. This act also led to the expression ‘Shit Face Drunk’. Let me explain. The act was instated in order to clean the unsanitary city of Edinburgh. In the early 1700s Edinburgh was overcrowded with families sharing single rooms. Toilets at that time were simply a bucket filled up during the day and thrown out through the windows onto the streets at specific times. The term ‘Gardyloo’ was used when this was done, to warn people walking below to move away. All waste went to the Nor Loch (now Princess Park). The expression ‘Shit face drunk’ came to be when people got so drunk that they took time after hearing the bellows and looked up while someone was throwing out their ‘garbage’ (read: shit/waste). Pretty funny I’d say.

Another infamous person with a pub named after her in Grassmarket is Maggie Dickson. Long story short, Maggie Dickson was hung for concealing a pregnancy. She was discovered when a stillborn baby was found besides the river bank. Maggie was hung and pronounced dead, but strange sounds were heard from her coffin after she had been taken away in a carriage, she was still alive. The law saw this as God’s will and she was allowed to live. She is also considered an inspiration for Nearly Headless Nick from Harry Potter. 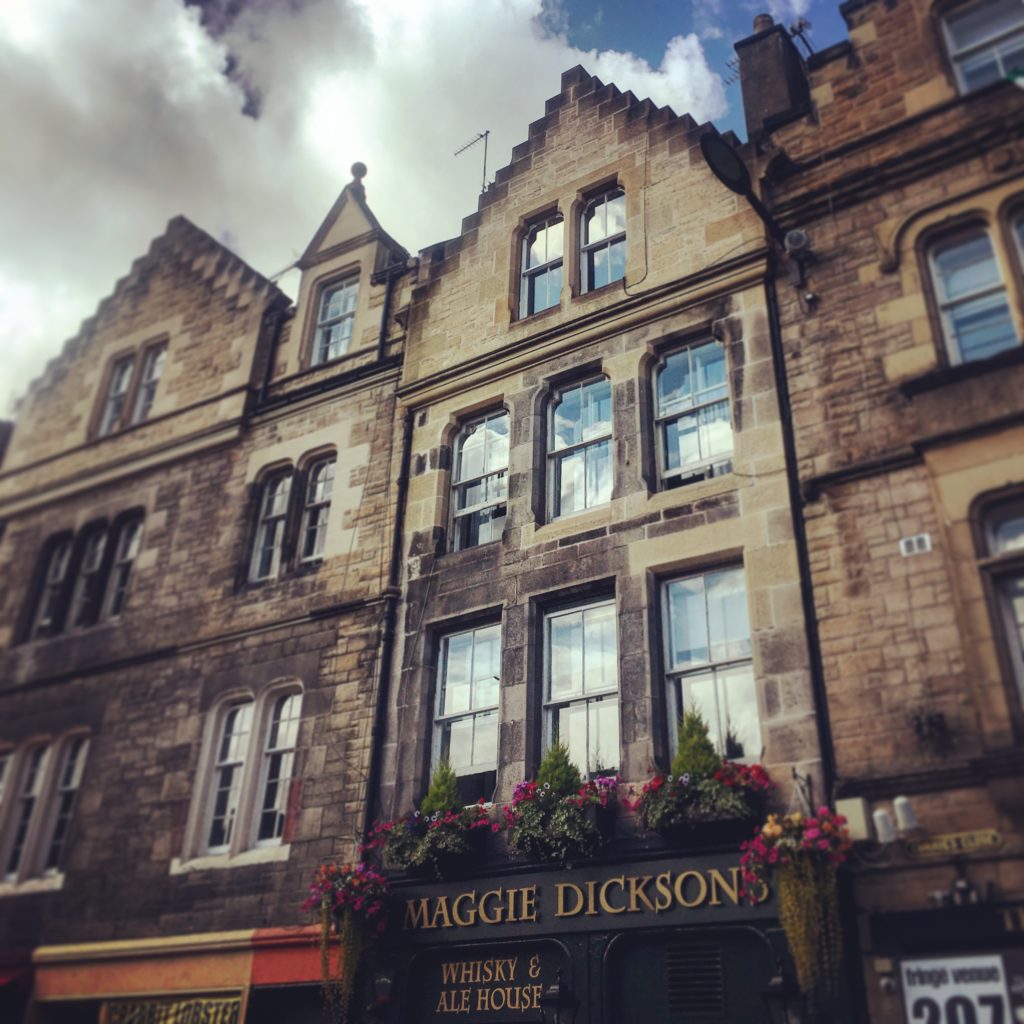 Another interesting tit bit about the law is that there were 3 verdicts. Guilty, Not Guilty and Not Proven. Not Proven meant that “we know you’re guilty, but we can’t prove it.” This City truly has a lot of fun trivia and history, and you get to learn all of this while walking. I couldn’t think of a better way to learn.

The last spot on the tour was a cemetery. It wasn’t grave at all. It was actually fun. The last story was the “aww moment” of the tour, where we were introduced to Bobby. In 1850 a man called John Gray was employed as a night watchman and a Skye Terrier called Bobby accompanied him everywhere. When he died in 1858, John was buried in Greyfriars Kirky. Bobby touched the hearts of the locals, when he refused to leave his masters grave. His fame spread, people made sure he was safe, well fed and looked after. For fourteen years the dog kept watch over the grave before he passed. He was the only dog that was allowed to be buried in that cemetery because of his loyalty to his master and how much the people loved him. Till date people come and leave sticks at his grave. He is fondly known as Greyfriars Bobby. There is even a statue in his honor called Greyfriars Bobby Memorial. 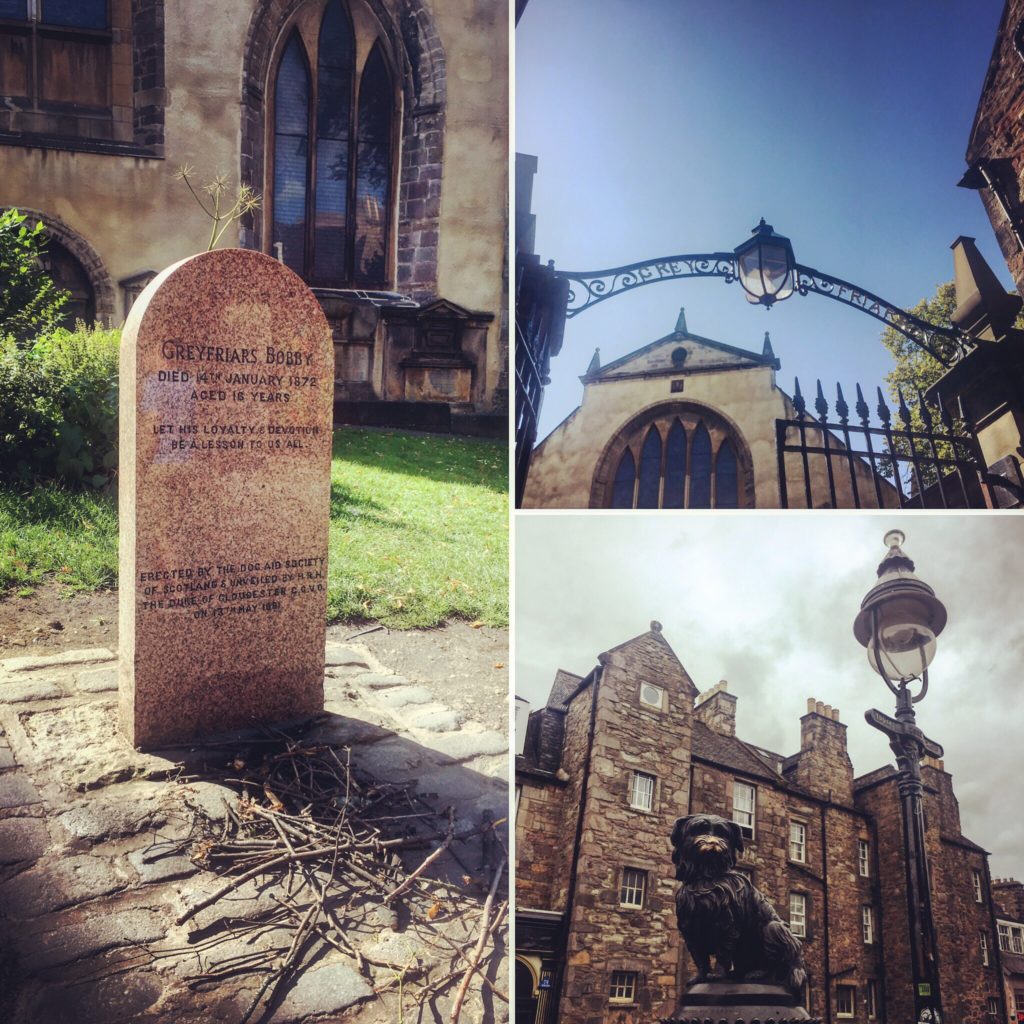 It was such a lovely end to a wonderful three hour tour. I hope you enjoyed it as much as I did. At least the parts I enjoyed. This was just half the day, the rest of the day I did a Harry Potter Trail. More on that, in the next post.