My hostel had an amazing environment. The cafe had a great vibe, good food and I enjoyed their coffee. So the start of the day was usually from there. Having had a basic breakfast, I headed out on a rainy morning.

I started the day off with a dose of comedy as part of the Fringe Festival. Or at least what I thought would be good comedy. It was a show titled ‘2 Religions 1 Comedy Show’ by two men Henry  and Joe. They talked about their differences and backgrounds with Henry growing up as a Jew and Joe a Hindu whose family had migrated from India. Honestly, I wasn’t impressed, the jokes on India were so sad and being the only Indian in the audience, I realised they were more for effect than being good representations. Needless to say, I left. The one good thing about the place, was the venue. It looked so pretty in the rain outside.

I decided to walk around and go to a place called the Elephant House. It’s supposed to be the place where J.K. Rowling sat and wrote Harry Potter, though there is a debate over which is the original coffee house where she sat and wrote. (That’s in another Potter Post.) This place was quaint, didn’t have WiFi as they encouraged people to talk to each other and seemed to always be packed. What this place is oddly famous for is its restroom. Yes, you read that right. People go there because the loo’s walls are lined with graffiti by Potter fans and the establishment let’s it be that way. So I did what I love to do, left a note in the loo. With a long queue to actually sit, I took my take away coffee, and was out the door.

My hostel was near Grassmarket where there was always something going on. Some days there were musicians, other days there were magicians and one day I even saw a small group having a headphone party. It was always a fun place to cross. Since I had an interest in the Book Festival, I attended a brilliant creative writing workshop for the rest of the afternoon and then did a walk about near Edinburgh castle.

In the evening I went back to the Spiegeltent, where another very interesting performance by the Science Fiction cabaret awaited as part of the Unbound series. It was something I had never seen before, and I loved it. I felt like I was watching a version of Chicago live.

Throwback to an amazing time I had in Edinburgh where I saw this performance at the Spiegeltent, part of the Unbound series of the Book Festival. #amazed #travel #music #drama

It felt like it was a theme, the first half of these shows were brilliant, the second half was lack luster music wise. Maybe it wasn’t to my taste. As I decided to leave, I met a wonderful sister-brother pair from Mumbai. We got talking and hit it off and decided to chill together. It ended up being so serendipitous that you meet someone from the same city you stay in, in a country so far away and they were there for one night. We had a great time chilling at bar 1 and then bar 2, where we met an American father-son duo. The father had brought his 32 year old son to Scotland on his birthday, to discover his Scottish roots. So, we had some drinks with them as well. I mentioned loving Karaoke and then was made to sing a song for the birthday boy, I managed possibly 4 lines. I love such eventful unplanned evenings. The Americans had a flight, the other Indians had a train and I had a hostel bed to get to, so we called it a night. One thing I knew, I won’t be getting up early the next morning. 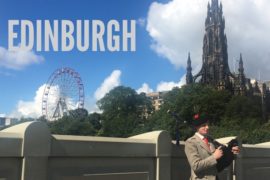